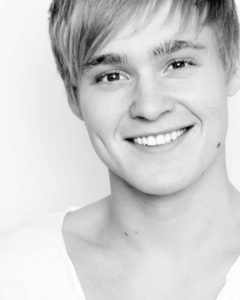 Ross is currently appearing as Roger in Rent at the St James Theatre until January 28th and then off on tour around the UK. Ross’s theatre credits include My Fair Lady Proms 2012 (Royal Albert Hall); Charlie And The Chocolate Factory (Workshop); Ensemble and understudy to Warner and UPS guy in Legally Blonde (Savoy Theatre); Drew in Rock of Ages (Shaftesbury Theatre) and Ensemble as well as understudying and playing the role of Galileo in We Will Rock You (Dominion Theatre). Ross chats to fairypoweredproductions…

With Thanks to Ross for speaking to fairypowered

HAS TWO RECORD-BREAKING PERFORMANCES ON

AND RECORDED THE HIGHEST EVER WEEKLY NET

IN THE HISTORY OF THE THEATRE

STOMP turned 25 in August 2016 and will celebrate its 15th birthday in London and its 10th birthday at the Ambassadors Theatre in September 2017.

STOMP was created by Luke Cresswell and Steve McNicholas and was first performed in 1991 in Edinburgh.  The show played Sadler’s Wells Theatre in January 1994 and won the Olivier Award for Best Choreography, before opening in New York in February of the same year.  The European company was created in 1997 and began the show’s London run at the Vaudeville Theatre on 25 September 2002, transferring to the Ambassadors Theatre on 27 September 2007.

One of Britain’s greatest exports, STOMP has toured the globe for 25 years, playing to more than 12 million people in 53 countries across 6 continents. There are currently four STOMP companies performing worldwide, including New York, where the show has been running for over 22 years, London, now in its 15th year, a world tour and a North American tour.  Last year, STOMP completed a very successful 10-week season in Beijing and visited India for the first time in December, playing a two-week sell-out run in Mumbai.

STOMP is presented in London by Yes/No Productions and Glynis Henderson Productions Limited.

Running Time: 100 minutes with no interval

“This venue is quickly shaping up as one of the most exciting ones amongst the London pub theatres!”  – RemoteGoat

The Bread & Roses Theatre is entering its third year and we have another brimming season lined up, featuring revivals, new writing and many returning companies.

Our theatre year kicks off straight away with Between a Man and a Woman written & directed by Scott James (4th to 14th January). This new and harrowing drama focuses on the taboo subject of domestic violence and questions as to whether we can fully know what goes on behind closed doors and within the sanctity of marriage. Later in the month we then welcome a new musical one-woman-show about a perpetual millennial trying to find her way in the world, A Snap Musical written & performed by Lauren Stones (24th to28th January). Taking is into February is Necessity written & directed by Paul Macauley (31st January to 4th February), a new play about our need to hold on to ideals and what we create in the world when our needs go unmet, coming to the Bread & Roses Theatre after a hugely successful sell-out run at Brighton Fringe. Brand new theatre company Bag of Beard also make their debut with Two Short Stories (6th to 10th March), featuring Torn Apart by Christopher Georgiou & Shauna McLean and Bath by Alexander Knott.

Furthermore, we will host a revival of Patrick Marber’s iconic Closer (19th to 22nd January), which looks unblinkingly at modern relationships, in which sex is the subject even when it’s not, honesty is not always the best policy, and people with choices seem to only be able to make the wrong one.  And the season features another revival, which will be Nick Payne’s Constellations (28thFebruary to 4th March), a play about free will and friendship; it’s about quantum multiverse theory, love and honey, and won the Evening Standard award for Best New Play in 2012. Later in the season we will welcome Purple Cast Productions with a double ‘Bill’ Shakespeare of Macbeth & Twelfth Night (21st March to 1st April).

Audley & Co. Productions return to our theatre with Sisters written & directed by Natalie Audley (7th to 11th February) as do our associate company Get Over It Productions with their acclaimed all-female production of Shakespeare’s The Taming of the Shrew (21st to 25th February), Free Rayne Artists with the third instalment of their new writing night Spiral (12th to 14th March), and Third Person with improvisational show Clowns Are Not Funny (5th February, 5th March & 7th May). Also returning are Goblin Baby Theatre Co. with a series of shows, which are: Where do we go from here? (12th & 13th February), script-in-hand performances responding to Brexit & Trump; a V-Day benefit production of Eve Ensler’s iconic and award-winning The Vagina Monologues (16th to 18thFebruary); & Screw the Looking-Glass a work-in-progress showing of a new darkly-comic one-woman show written & performed by Tessa Hart.

Furthermore, the The Bread & Roses Theatre continues its support for playwrights and theatre-makers with several free events: Playwrights Circle (30th January, 27th February & 27th March), a friendly and supportive group in which playwrights can share their work and work-in-progress, & Networking Event (20th February), for those interested in bringing their own work to the venue.

End of last year Godiva Films also released a short documentary about The Bread & Roses Theatre’s journey up to its 2nd year anniversary (www.youtube.com/watch?v=0DxL0Jkxldw) and the theatre was named as a recipient of the ICWP 50/50 Applause Award for the second year in a row.

For details on all listings and more head to www.breadandrosestheatre.co.uk.

Following the sell-out shows Toxicity and Slight Delay in 2016, Thick & Thin Theatre present a brand new play about money, drugs and… zombies. WARNING: ‘BRAINS’ contains strong language, scenes of violence and drug use, awkward romantic encounters and the wrath of an undead scientist.

In the not so distant future humanity has fallen victim to a disease, turning people into flesh craving, drooling, rotting versions of themselves. However, the clichéd disease spells good news for one company – business is booming at MediBite Inc., where sales of their drugs and medical products have shot through the roof.

After waking himself up with his daily cocktail of drugs, Harry, the money obsessed manager, does his best to keep his terrifying CEO, Ursula, happy, while also keeping his eye on his niece and apathetic new intern, Tina. Meanwhile, accountant and hopeless romantic Jeff shows skeptical new salesman, Rosie, around the office…. However, everything changes when smug scientist Stuart finds a cure for the disease that has ravaged the world.

Thick & Thin Theatre are a young company based in London, founded in 2016 by Cameron Szerdy, Tom Spencer & Jack Dent.  They enjoy creating theatre that’s funny, fast paced and tinged with irony; taking everyday settings and injecting them with a generous helping of the absurd; and above everything else, they aim to make people laugh.

Theatre N16 is a trailblazing theatre company, dedicated to creating a creative hub where new and existing works can be explored and pushed into new realms. Theatre N16 is proud of their commitment to the welfare of creatives, operating under an Equity Fringe Agreement. This promoting and nurturing of talent means that Theatre N16 is a bastion for development within the context of a society in which the arts are increasingly struggling to stay afloat.

WHAT SHALL WE DO WITH THE CELLO?

by Matei Visniec
UK premiere at the London VAULT Festival 2017
8-12 February 2017
www.vaultfestival.com
What Shall We Do With The Cello?, a funny, and sharply relevant one-act play by Romania’s most prolific and celebrated contemporary playwright, Matei Visniec, is to have its UK premiere at VAULT Festival 2017.
What Shall We Do With The Cello? is one of many of Visniec’s great works banned by the Ceausescu regime in Romania, causing the playwright and poet to seek asylum in Paris in 1987, where he still lives and writes.
A storm, a waiting room: the man with the newspaper, the woman with the veil, the old man with the stick. In a corner, the man with the cello is playing his instrument, ceaselessly. At first they listen to him and appreciate him, but very quickly the repetitive and obsessing tune drives them mad. They try, taking turns, to convince him to stop, at least for some minutes, some seconds…. But the man with the cello doesn’t want to, he doesn’t reply to them. He is playing, more and more menacing, alone against everybody….. The others will have to organise themselves against this unexpected musical aggression –  Matei Visniec.
Funny and dark, this surreal comedy goes straight to the heart of intolerance and stupidity and features the intriguing live music of one of the world’s leading avant garde composers, Iancu Dumitrescu (Hyperion Ensemble).
Matei Visniec is a significant European playwright, whose multi-award-winning work has been staged in over 30  countries from Japan to the USA and has been translated into 25 languages. Visniec is perhaps best known in the UK for the acclaimed Young Vic production of The Body of a Woman as a Battlefield in the Bosnian War: ‘you emerge both intellectually informed and emotionally moved’ wrote Michael Billington,The Guardian.
This UK premiere of What Shall We Do With the Cello?  is directed by Vasile Nedelcu, whose early production of this play, in Romania, received wide critical acclaim including high praise from the playwright himself.  Nedelcu has directed extensively on main stages all over Romania. His work in the UK includes The Chairs and The Lesson, both by E. Ionesco, at the Camden Fringe in 2011 and Ibsen’s Peer Gynt at Glasshouse Festival, Stourbridge in 2005.
The cast is Simona Armstrong as the Lady with the Veil (finalist in BBC’s ‘How Do You Solve A Problem Like Maria?); Mihai Arsene is The Man with the Stick (Sky/HBO’s ‘Strike Back’) and Tudor Smoleanu is The Man with the Newspaper (‘Graduation’ 2016, ‘Bucharest Non-Stop’ 2015). Chamber musician Nick Allen is The Man with the Cello (Modulus Quartet, Bergerson Quartet, Welsh Chamber Orchestra, Birmingham Opera Company).
What Shall We Do With the Cello? is presented by  Atelier Theatre Studio, a Brighton Fringe award-winning company with a growing reputation for sparkling productions ranging from Ibsen to Ionesco.
www.ateliertheatrestudio.co.uk.
This production is made possible with support from The Romanian Cultural Institute in London.
What Shall We Do With the Cello?
VAULT FESTIVAL 2017, The Cage
The Vaults, Leake Street, Waterloo, SE1 7NN
Wednesday 8 – Sunday 12 February 2016, 7.15pm
Press night: Wednesday 8 February
Matinee on Sat 11 Feb, 4.45pm
£12, 2-4-1 on Wed 8 Feb
Duration: 1 hour
www.facebook.com/events/806239486184016/
www.ateliertheatrestudio.co.uk
www.visniec.com
www.vaultfestival.com, @VAULTfestival, #VAULT2017, www.facebook.com/VaultFestival